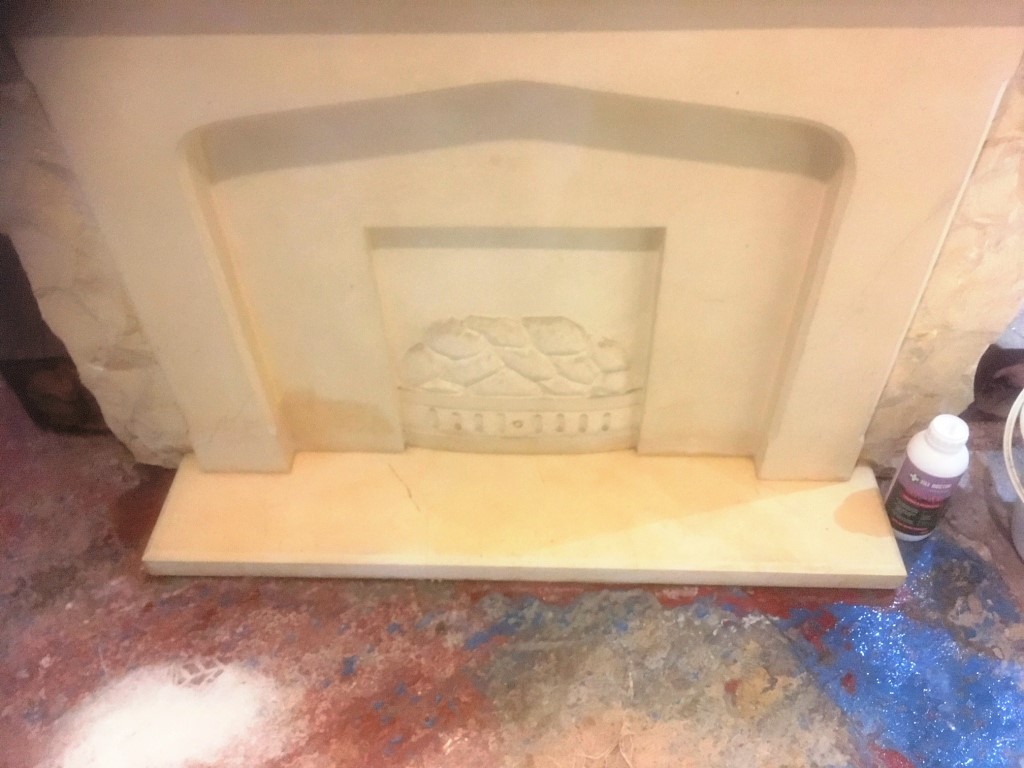 Morecambe is a large town on Morecambe Bay in Lancashire, and is a tourist hotspot within the region – particularly amongst beach goers during the summer. However, due to its location of being right next to the coast and near to the River Lune, Morecambe is an area which is commonly affected by flash flooding. Just last year there were several episodes of severe flooding.

This flooding has a big impact on houses and businesses – the damage water can cause can come as quite a surprise if you have not experienced it before. I recently visited to a business in Morecambe which had been affected by flooding. The business was, in fact, a fireplace showroom and a pair of the Limestone fireplace hearths on display had been stained by the water.

We were asked to remove the water marks left by the flooding. One of the hearths has been in use as a test model, with a coal burner installed, and it hadn’t been cleaned properly in some time. As you can imagine, there were more problems than just the water stains to overcome! Both hearths would require a deep clean and fresh seal.

To begin, we applied Tile Doctor Oxy-Gel to the hearths. This product is a specially formulated, alkaline-based degreaser and cleaner. As it comes in a gel form, not a liquid, Oxy Gel can be brushed into vertical surfaces and left to soak, without risk of it either disappearing into the Limestone or, even worse, trickling down the side of the surface. We would not want it coming into contact with the carpet, for instance.

We left the Oxy-Gel to dwell for a short period on one hearth while we worked on the other, applying the same treatment. After around twenty-five minutes we rinsed off the gel with clean water and then extracted any excess moisture with the use of a wet vacuum.

This process did a good job of cleaning the Limestone, but more work was required to restore its appearance, so the hearths were polished using a set of diamond encrusted hand held burnishing blocks. We started with the coarsest block (50 grit) and rubbed the stone with a bit of added water as lubrication, before wet vacuuming away the excess residue. This process was then repeated with progressively finer blocks (100, 200 and 400 grit), and the hearths were given a final rinse with fresh water.

There were some odd ring marks on one of the Limestone hearths that we couldn’t remove. Thankfully, the owner put our minds to rest on this problem, as he said they were there when he initially purchased the stone over 20 years ago. They had been covered with dirt ever since and the customer was surprised, but not shocked, to see them again. I suspect that these marks were caused by the natural mineral deposits within the stone. These should not be seen as a stain, but just a characteristic of the stone – and no amount of cleaning will get these marks out.

We would normally seal a light-coloured stone like this with Tile Doctor Ultra-Seal, as this no-sheen product helps to retain the natural patina of the stone. Alternatively, if we wanted to darken the tone of the Limestone, we would apply Tile Doctor Colour Grow, which is a colour-intensifying, impregnating sealer. Two coats of either sealer would suffice, in this case despite being very pleased with the results of the cleaning, the customer decided that he wanted to take care of sealing of the stone himself.